We wanted to do a short trip to Nara since it is close by Osaka and relatively a small town. So after completing my morning session at the conference we took the Osaka sub-way system to a station called Tennoji.

From Tennoji we needed take JR Yamtoji line to Nara. We wanted to do a short trip to Nara since it was close to Osaka, relatively a small town but had couple of UNESCO's World Heritage Sites. So after completing my morning session at the conference we took the Osaka sub-way system. At Awaza station we caught the Chuo Line (Green) to Tanimachi 4-chome and at Tanimachi 4-chome caught the Tanimachi Line (Purple) to Tennoji station.

In Tennoji station we needed to go from the Osaka Municipal Subway system to Japan Railways' Yamatoji Line. The Yamatoji line runs from JR Namba Station to Kamo (three stops past Nara). Since the Yamatoji line is part of JR system we used our JR Pass and rode the train for about 45 minute. The scenery was very beautiful with lush green plants everywhere including rice paddy.

At Nara JR station we picked up a tourist guide and had lunch at the local McD. From Bus Stop Number One we took Bus Number two toward Kofuku-ji temple. On the way to the Temple we saw lots of spotted deer roaming the grounds. The Kohfuku-ji Temple complex has several structures and we saw the following: Kokuhokan (National Treasure House), Tokondo (Eastern Golden Hall), Nan-endo (Southern Octogonal Hall; open only one day in a year), and Goju-no-to (Five storied Pagoda).

From there we walked all the way along the Nara National Museum, Nara Prefecture Tourist Office to the Todai-ji Temple.

Todaiji Temple ticket is shown below: 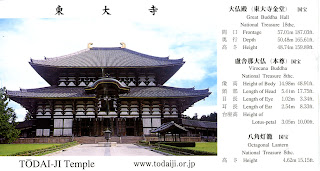 Posted by Somasundaram at 9:11 PM