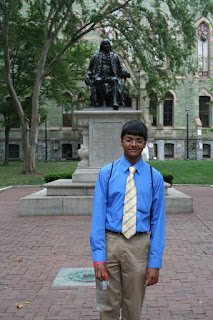 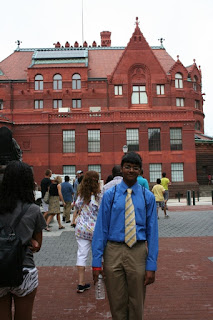 Today morning we had breakfast at the Comfort Inn at the Downtown historic area. There were lot of people at the dining place but we managed to get some breakfast and checked ourselves out. Then we drove through the Philadelphia's downtown and parked our car on the intersection of 36th Street and Walnut Street and went straight to the information session at College Hall. 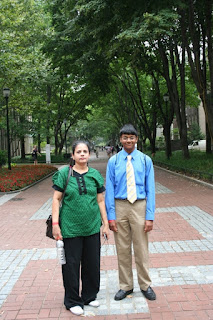 The information session was one hour long and then we went with David for another 1 1/2 tour of the campus. We saw the Engineering School, Library, Business School, and Locust walk and other areas of the Campus.

Then we ate some lunch at Taco Bell and had some coffee. Finally we went to the Penn Book Store at 36th Street. There we bought some memorabilia and left Philly. 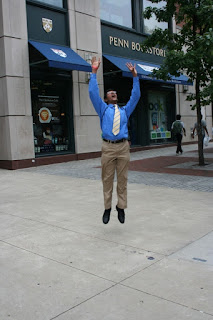 We took I-95 and took a detour to Edison's Ferrari dealership. There VTS looked around some Ferraris and took some pictures.

Once that is done we drove all the way back to Newark and stayed at a motel near EWR airport (Newark International airport).

Then we ventured out Newark Avenue and had dosai, idli, vadai, and sambar. We went to bed around 10 PM


Posted by Somasundaram at 6:38 PM No comments: 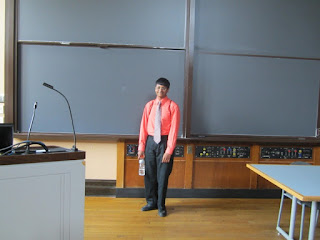 Today morning we left the motel and drove to Princeton, NJ to visit the Princeton University Campus. We parked our car in Lot 23 and took the central line shuttle to Frist Campus Center. Since there was no complimentary breakfast at our motel and there was no time or place grab breakfast we had some coffee and went to the one hour long information session. The session was held at the same classroom where Albert  Einstein taught a class when he was at Princeton. 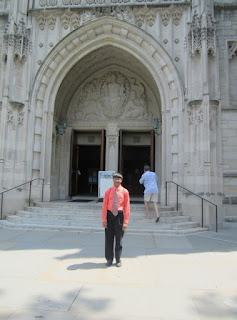 Following the information session we went on a walking tour of the campus. We saw most of the campus but after 45 minutes we peeled off and went to Nassau Street to grab lunch. After lunch we went the Princeton Bookstore and bought T-shirts and coffee mugs for VTS.

There we met a lady from Tamil Nadu. She had been at NJ for thirty years. We then took the shuttle back to our parking lot and drove toward Philadelphia on US 1 & 9 and later on I-95. We reached Philly around 3 PM and checked into a good hotel on the ocean front.
Posted by Somasundaram at 12:37 PM No comments: 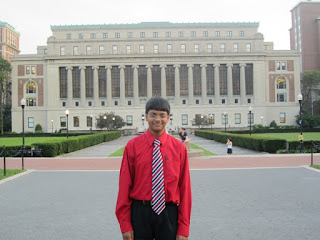 Today morning we checked out of our motel in Ridgefield, NJ and drove directly to Columbia University In the City of New York. We found meter parking on Amsterdam Street and went for a stroll on the campus. Then around 10 AM we fed the meter again and attended the information session held at the Uris Building and the University Hall. The session was about an hour long. 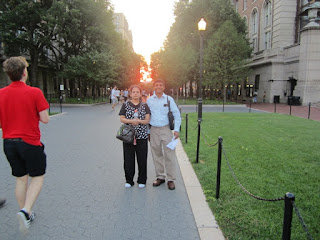 Following the information session there was a tour of the campus. Since we had already seen the campus ourselves, we grabbed some lunch at the Earl Building. Then we visited the Columbia Bookstore on the Broadway and grabbed some memorabilia and left the Morning Side Campus.

We drove to Battery Park in lower Manhattan and parked our car near the ferry terminals. We then walked to Castle Clinton and bought tickets to Liberty and Ellis Island ferry ride.

It was a hot and humid day with temperatures in the low 100s. Fortunately, the line for the ferry was short and after a brief security check we boarded the ferry and went to Liberty Island. Since they have closed the statue climbing we went around the Lady Liberty Statue, took some picture, grabbed some memorabilia and boarded the next ferry to Ellis Island. At Ellis we went around the Immigration Hall and had some coffee and cake.

Finally we took the ferry back to Castle Clinton. We paid for the parking people and drove to Trenton, NJ to stay that night at a Ref Roof Inn Motel.
Posted by Somasundaram at 12:29 PM No comments:

This morning we left our motel in Cortland, NY and drove about 30 minutes via Cortland, Dryden and reached Ithaca around 8:45 AM. We parked our car in the visitor lot and headed to the Arts & Science Information session conducted by Asst Dean of Admissions and listened to him for about an hour. 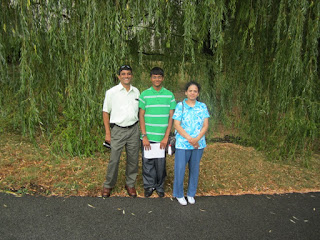 Then we went on the student lead tour the Cornell University campus. We visited the clock tower, book store, Sage Hall, Ives Hall, various departments and the finally arrived back at the Information Center near the Day Hall. The tour took about 1 1/2 hour. 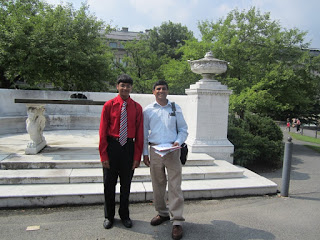 We then went to the Kennedy Hall and ate at the Trillion food court. The food was good. It was almost 1 PM. Soon we went to the Cornell University Bookstore and bought some memorabilia for our trip back home. 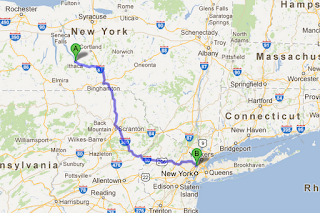 Soon he left Ithaca and headed back to New York city. We decided to take NY-79, I-81, I-380, and I-80 to reach our motel in Ridgefield, NJ. By the time we arrived it was almost 6 PM. We checked in and drove to the campus of Columbia University's Riverside Height campus. Since it was summer there was plenty of light, the sun was starting to set and we took some video and photos.

We drove and ordered pizza take-out and went to bed by 10 PM.
Posted by Somasundaram at 9:00 PM No comments:

Today early morning we left the Jacksonville Plaza Hotel and Suites and drove the Economy Parking Lot 2 at the Jacksonville International Airport (JAX), parked our car on the long-term lot and took a parking shuttle to the Terminal A to catch our Delta flight to LGA.

Everything went well. We checked few bags for $25 each and left early in the morning with no delays. By the time we arrived in LGA we were about 20 minutes ahead of the schedule and landed safely. We took the Dollar Rental shuttle to a location in East Elmhurst, NY and rented a 2013 Ford Escape Hybrid SUV for our trip to Cornell.

We had some coffee and donuts. We had already rented a GPS unit from GPSRentals.biz which was much cheaper than ($5/day) one would get from the car rental company. We plugged in our address of Cornell University, Cornell, NY and drove for several hours. On the way stopped at nice scenic byway just before reaching New York state (in Pennsylvania) and arrived in Cornell (amidst rain). We went around Cornell University taking some pictures (it stopped raining by then) and looking around the campus.

Finally we drove to motel in Cortland, NY and stayed that night.
Posted by Somasundaram at 8:29 PM No comments:

Today late evening we left for Jacksonville, Florida on our way to New York City. We decided to drive to Jacksonville, FL and fly from there to New York LaGuardia airport using Delta instead of leaving from our hometown since the tickets were 1/3 cheaper. Even after considering the gasoline, hotel stay, parking and food to and fro the flight from JAX to LGA made sense both economically and avoided multiple transfers.

We stayed at the Jacksonville Plaza Hotel & Suites on Duval Road in Jacksonville. The hotel was very good and had very good room. It was only 3 miles from the JAX airport.

Posted by Somasundaram at 6:20 PM No comments: