Back to the US
Saturday, Dec 8 and Sunday Dec 9, 2012
Chennai - Dubai - New York - Jacksonville -Tallahassee

We left late in the afternoon around 5:30 PM from Chengalpattu in Thiyagu's SUV with another car carrying the luggage and my siblings families. We arrived at the Chennai International Airport Departure area around 7:00 PM and Bhanu had just arrived.

We said goodbye to our folks and checked into our Chennai Dubai flight EK547. The flight was delayed by 30 minutes and flew over the Arabian Sea. However, as it approached Dubai we were further delayed due to the unavailability of landing place ended by landing an hour late outside the gates and needed to use a bus to get to the Terminal 3.

We barely made it to our next flight to New York JFK and hoped our luggage would make. The flight EK203 a Boeing 777-300ER was also delayed fortunately since many people were still boarding past the scheduled departure time. We hoped this would be good flight since the duration was 14 1/2 hours long. It was okay due to good entertainment system called ICE.

We arrived an hour late in New York and went through the immigration and customs clearance and rechecked our bags to Jacksonville and waited for another delayed flight to JAX. Finally we left at 4 PM and arrived in JAX by 6 PM via jetBlue.

We picked our car and drove home stopping at a Taco Bell for dinner. By the time we arrived home it was almost 9:45 PM.

Posted by Somasundaram at 8:50 PM No comments: 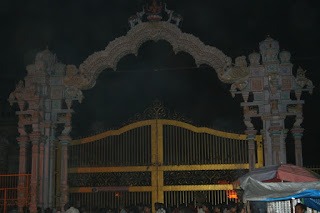 With Thiyagu I went to Vellore to my relatives. We had planned to visit the "Golden Temple of Tamil Nadu" aka, Sripuram Lakshmi Narayni Temple but we were running late when we arrived at Vellore.
However, our realtive was ready and took us to the temple. We barely made it in time for the regular temple visiting time. The temple, the architecture, the surroundings were very impressive. We spent about 1 1/2 h at the temple.﻿
﻿
Posted by Somasundaram at 8:27 PM 2 comments: 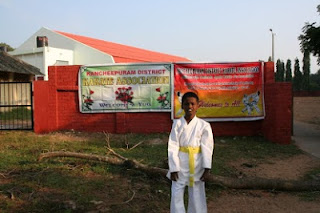 Today we left around 6:30 PM with Arjun and Anita toward Kalpakkam NESCO auditorium to participate in the Kacheepuram district Karate tournament for Arjun. We arrived there by 7:45 AM and the tournament participants were required to be there by 8 AM. We had breakfast in the Mahindra XYLO SUV and headed to the site. There weren't that many people and it took about 1 1/2 hour before everything started to fall in place. 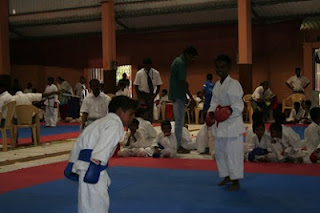 Arjun didn't participated in the katta part but did so on the individual fighting competition. The event was over by 12:30 PM and we headed home and arrived at Chengalpattu by 1:45 PM.
Posted by Somasundaram at 8:33 AM No comments: