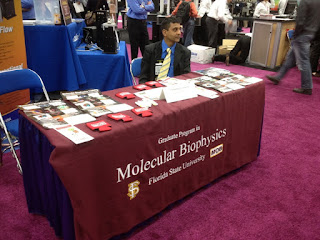 I registered at the 56th Annual Biophysical Society Meeting in San Diego, CA and also for the Graduate and Post-doc Institution Fair. I arrived at 12:15 PM and set-up the table in the Hall FGH around 300 aisle on position six. The Fair was set-up in the same hall where commercial vendors were situated.

Soon Claude came and helped me put the table cloth and as the two hours time went by many more people stopped by and took the information. Our own MOB students also came to the table.

Posted by Somasundaram at 12:05 PM No comments:

Then I arrived in Atlanta in a slightly bumpy ride due to cloudy weather. There was no rain in Tallahassee or in Atlanta while I left or landed but it had rained in ATL before and rained in TLH while I was in ATL. I arrived 2:20 PM on concourse D 28.

My connecting flight to San Diego was in Concourse A19 and it was 4:25 PM. So I went to Concourse A and grabbed some pizza and coffee and waited to board the flight. There was free Wifi at TLH but not in ATL.

I boarded the flight. My DL 1467 flight to San Diego took off around 4:35 PM. It was about five hour flight. We went over AL, LA, TX, NM, AZ, and CA. Half-way through the flight around Dallas they served some cold drinks and peanuts. I was able to watch some free TV shows like TBS, Comedy Central, Cartoon Network, and CBS. But all the interesting things to watch need to be purchased ranging in price from $2 to $6. Nothing was worth that price. Then approximately 45 min before landing they served coffee and peanuts. Fortunately, we landed 10 min early at 6:25 PM.

Even though I arrived in time, my checked luggage didn't make it. So I filled paper work for luggage to be delivered home.
Posted by Somasundaram at 8:00 PM No comments:

VTS and I made a one day trip  University of Florida, Gainesville to be part of the visitors of freshman class. This was our first Recruitment Conference visit to UF. We left last evening (Friday) around 6 PM. It was a cloudy day and there were few drizzles on the way (mostly cloudy while at I-10 and drizzled while at I-75). We just stopped once at a rest stop. 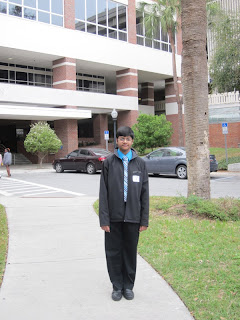 We arrived at VB's Springs Dorm around 8:40 PM. We all three then headed to Kabab House for dinner at the intersection of W University Drive and 12th SW Street. Then we dropped off VB and went to the motel. Our directions were completely wrong. Then we looked for accommodation in two overbooked hotels. Finally we arrived at one place that had a room but happened to be next to the one we had reserved. So we asked the front desk person to hold that room and found our own reservation. Interesting and long evening.

In the morning we checked out of motel and headed to J. Wayne Reitz Union via the Museum Road. We parked the car and went to the registration. There were long lines and literally hundreds of people (even 8th graders attended the recruitment). The following was the schedule for the day: 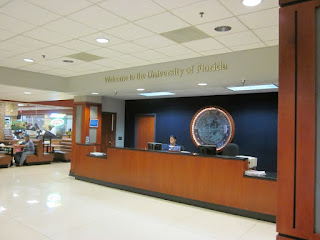 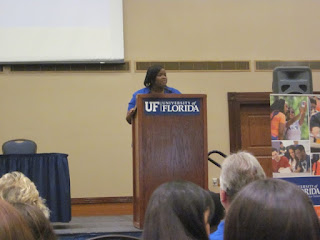 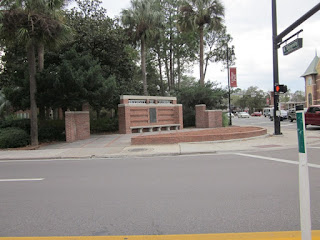 Then at 2 PM we started to drive towards our home. In Alachua we stopped and picked up our lunch. The rest of the day was cloudy and we arrived home around 5:10 PM.

Posted by Somasundaram at 7:34 AM No comments: